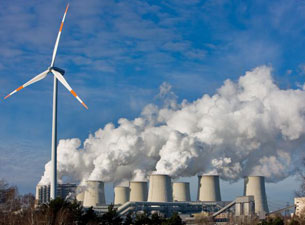 is the observed century-scale rise in the average temperature of Earth‘s climate system.Since 1971, 90% of the increased energy has been stored in the oceans, mostly in the 0 to 700m region.Despite the oceans’ dominant role in energy storage, the term “global warming” is also used to refer to increases in average temperature of the air and sea at Earth’s surface.Since the early 20th century, the global air and sea surface temperature has increased about 0.8 °C (1.4 °F), with about two-thirds of the increase occurring since 1980. Each of the last three decades has been successively warmer at the Earth’s surface than any preceding decade since 1850.

Scientific understanding of the cause of global warming has been increasing. In its fourth assessment (AR4 2007) of the relevant scientific literature, the Intergovernmental Panel on Climate Change (IPCC) reported that scientists were more than 90% certain that most of global warming was being caused by increasing concentrations of greenhouse gases produced by human activities.In 2010 that finding was recognized by the national science academies of all major industrialized nations.

Affirming these findings in 2013, the IPCC stated that the largest driver of global warming is carbon dioxide (CO2) emissions from fossil fuel combustion, cement production, and land use changes such asdeforestation. Its 2013 report states:

Climate model projections were summarized in the 2013 Fifth Assessment Report (AR5) by the Intergovernmental Panel on Climate Change (IPCC). They indicated that during the 21st century the global surface temperature is likely to rise a further 0.3 to 1.7 °C (0.5 to 3.1 °F) for their lowest emissions scenario using stringent mitigation and 2.6 to 4.8 °C (4.7 to 8.6 °F) for their highest.The ranges of these estimates arise from the use of models with differing sensitivity to greenhouse gas concentrations.

Future climate change and associated impacts will vary from region to region around the globe.The effects of an increase in global temperature include a rise in sea levels and a change in the amount and pattern of precipitation, as well as a probable expansion of subtropical deserts. Warming is expected to be strongest in the Arctic, with the continuing retreat of glaciers, permafrost and sea ice. Other likely effects of the warming include more frequent extreme weather events including heat waves, droughts and heavy rainfall; ocean acidification; and species extinctions due to shifting temperature regimes. Effects significant to humans include the threat to food security from decreasing crop yields and the loss of habitat from inundation.

Proposed policy responses to global warming include mitigation by emissions reduction, adaptation to its effects, building systems resilient to its effects, and possible future climate engineering. Most countries are parties to the United Nations Framework Convention on Climate Change (UNFCCC),whose ultimate objective is to prevent dangerous anthropogenic (i.e., human-induced) climate change.Parties to the UNFCCC have adopted a range of policies designed to reduce greenhouse gas emissionsand to assist in adaptation to global warming.Parties to the UNFCCC have agreed that deep cuts in emissions are required,and that future global warming should be limited to below 2.0 °C (3.6 °F) relative to the pre-industrial level.Reports published in 2011 by the United Nations Environment Programme and the International Energy Agency suggest that efforts as of the early 21st century to reduce emissions may be inadequate to meet the UNFCCC’s 2 °C target.